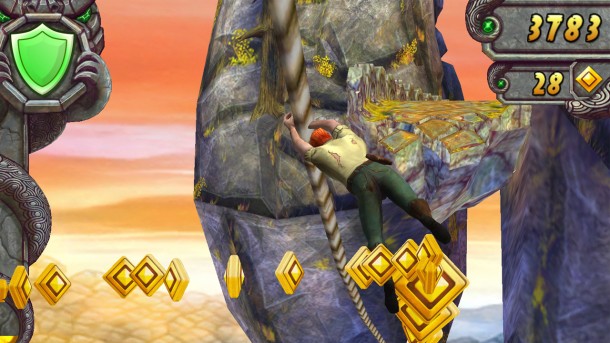 As whimsical and touchscreen-friendly as the endless runner genre may be, it’s amusing to imagine such games depicting a hellish, hamster-wheel torture visited on sinners in the afterlife. If, let’s say, you perpetrate a hit and run on a jogger during life, you get cursed to dash through roughly the same recycling terrain for eternity.

Fortunately for Temple Run hero Guy Dangerous and his cast of fellow unflappable – or was it unlockable? – explorers, the developers at Imangi have created a sumptuous new world for them to sprint through, as they narrowly outpace their old nemesis, the skull-headed demon monkey.

Temple Run 2 boasts the same elegant control scheme as the last game. Swipe up to jump over obstacles, down to slide under them, and left and right to change direction when the road suddenly takes a sharp, 90 degree turn. The most striking upgrades are evident in the new setting – floating cloud temple ruins – which are far more visually remarkable, and presumably more technically demanding. The nighttime fog of Temple Run provided an excuse for the game’s limited draw distance and eased the challenge of streaming in scenery. Level architecture could emerge quite suddenly out of the fog without seeming like it was bursting into existence in the way a Creationist might imagine creation by divine fiat playing out.

Temple Run 2’s daylight means everything has to be visible at a far greater distance, and the visuals are more cheery and vivid as a result. The new game also freshens things up with a minecart vehicle interlude, ziplines, waterfalls and slices of pleasantly undulating terrain to counter the stern linearity of its predecessor.

Temple Run 2 is a beautiful looking, natural extension of the series that never breaks stride for a second. The game’s only liability is that, as beautiful as its environments may be, their unceasing repetition can eventually grow wearisome. Like a child hearing about the concept of living in heaven for eternity and asking, won’t I get bored?