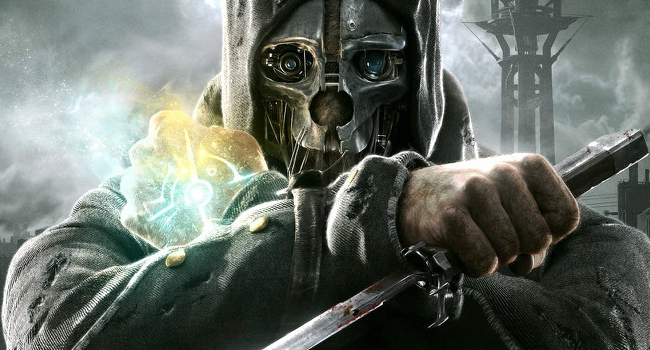 How to survive Dishonored without spilling a drop of blood…

1. Choose the less obvious path — Remember, “Dishonored” is all about choice. And part of that choice involves deciding how you’re going to get to where you need to go. I tried and failed repeatedly to get past one particular mission bloodlessly by approaching my target via what was probably the most obvious route. Then I stopped and took the time to better examine the environment. More to the point: I looked up. And that’s when I realized that the stealthy path — and the way to avoid my enemies head on — was above me.

Truly, a big part of not killing people in this game is not letting them see you in the first place. And to do that, you’re going to need to really pay attention to your surroundings.

2. Eavesdrop on conversations — “It tells you so much more about the world,” Smith says of taking the time to covertly listen in on the non-player characters (NPCs) in the game. Not only do you learn more about the strange, murky city of Dunwall, he says, once in a while you’ll get the combination to a lock or hear about a back door or a secret rooftop hatch into a building. And this information can be very helpful when you’re looking for non-violent ways to take out a target.

3. Choose your powers wisely — Which supernatural powers you choose and upgrade will play a big part in how violently or non-violently you play the game. For example, you probably don’t want to choose Devouring Swarm, which lets you sick a swarm of hungry rats on your enemies. Instead, Colantonio advises that you increase your Blink (teleportation) power to level 2 and select Possession as your second supernatural power.

“Possession is our escape card in case you get caught,” he explains. “You can just take possession of your enemy and they will forget about you as you possess them. It’s a very nice non-lethal tool.”

4. Sleep bolts — If you don’t want to gun enemies down with your pistol or fill them full of crossbow arrows, but years of playing first-person shooters have left you with a powerful need to shoot people, find and buy as many sleep bolts as you possibly can, Todd suggests.

Load sleep bolts into your crossbow and use them when your attempts at sneakery fail. Your enemies won’t bleed out, they’ll simply fall into a deep, snoring slumber. Which brings us to…

5. Be careful where you hide your snoozing enemies — Once you’ve sedated your enemies, whether with a sleep dart or by choking them unconscious, you’ll want to hide their body to keep your presence on the down-low. But be careful where you hide them. You do not, for example, want to toss your snoozing victims off a tall building. Because yeah, that would kill them and thus leave blood on your hands. Also, make sure you put them where the rat swarms won’t get them. Sleeping people make a tasty, tasty snack for those voracious rodent hordes.

6. Run away! Running away may seem counter intuitive in a game in which you are so well armed, but fleeing is an excellent option when your enemies spot you and your non-lethal tactics have failed.

“Most video games take the lazy way out and they just train you to follow a trail of breadcrumbs and go room, hallway, room, hallway and murder everyone in your path,” Smith says. “We are working against all of this training.”

To that end, “If you walk up on an enemy and, at first they’re not aware of you, when they see you they go into a surprised state where they stagger backward,” Smith says. “During that split-second of surprise, you can one-shot assassinate them. But you can also turn and run.”

7. Make the basic moves count — Furthermore, Smith says, “Don’t forget to use all of your basic moves. We allow you to go into stealth mode (so you’re less likely to be detected). We allow you to lean out from behind cover so you can observe people and they won’t observe you. We allow you to block during combat and not just attack. We allow you to choke people so they go unconscious. Some people may not be aware of all of those secondary options. Learn all of the little movements and master those.”

8. Have patience — Todd’s tip for those of you who want to play bloodlessly: “You must have infinite (bleeping) patience.” It’s true. Walking the righteous path requires more thought from players, more planning, more time … and much more patience.

Colantonio explains, “Playing like a good player that wants to spare everybody’s life is hard in a different way because you have to be slow, you have to be cautious, and you have to make an effort of going around things.” Which brings us to…

9. Save often. VERY often — This is my own tip culled from the time I’ve spent with the game. Suffice it to say, you may find yourself successfully sparing lives left and right … only to slip up and suddenly find yourself stabbing an enemy in the neck. These things happen.

So if you’re really set on keeping your hands clean and your chaos level low, then save your game and save it VERY often. That way when you slip up and behead someone, you can reload from a point a few moments earlier and try, try again. That is, unless you enjoyed stabbing that character in the neck. In which case, carry on my assassin friend. Carry on.

10. Do not give in to temptation — Know this: “Dishonored” will tempt you to make the streets run red with blood. Not only is killing in this game, well, really really fun … many of the enemies set in your path seem like they deserve a good, swift sword to the neck.

“People want to be good elementally,” Colantonio says. “So not killing, at an intellectual level, it seems like a good idea. But then, eventually, the NPCs throw something at you, and they are annoying, and eventually they hurt you. So there’s this moment where you might go, ‘All right, I’m just going to kill them all.’ We tempt you, in a way, to not be good, but at the same time you want to be good.”

How to solve the Animal Crossing: New Horizons May Day Maze